This is what you should know about MongoDB

If you love the JSON format to structure your data in it than you might have a question that what is the best data store ( Database ) to handle JSON objects?

Well the answer is MongoDB!! 🎉

Hello, I'm Vinit Parekh a Fullstack Web Developer and today we are gonna talk about MongoDB

MongoDB was founded in 2007 by Dwight Merriman, Eliot Horowitz and Kevin Ryan – the team behind DoubleClick.

At the Internet advertising company DoubleClick (now owned by Google) has struggled with both scalability and agility. Frustrated, the team was inspired to create a database that tackled the challenges it faced at DoubleClick.

This was when MongoDB was born.

MongoDB is a Distributed Architecture and an Open-source NoSQL Database Management Program with the essential function to create highly accessible and adaptable web-based technologies. 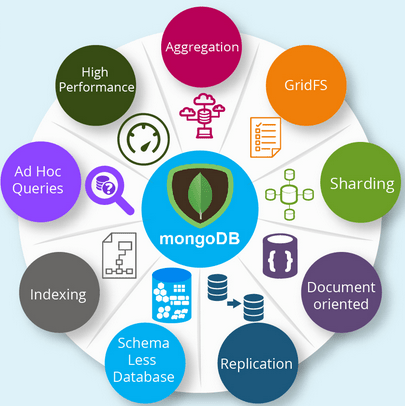 Speed: MongoDB is 100 times faster than the average Relational Database. As a document-oriented database.

Sharding: Another advantage benefit MongoDB provides is that it allows users to store extensive data. This is done by distributing the data to several servers connected to the application. If one server can’t handle the size of the data, it is shared to another server through a process called auto-sharding.

Flexible Database: MongoDB allows users have different types of data in a separate document because it is a schema-less database. This affords its users high flexibility and the freedom to store data of any kind.

Horizontal Scalability: MongoDB is a horizontally scalable database, which is one of its essential advantages. It allows users to distribute large amounts of data to several machines efficiently.

Transaction Feasibility: Some MongoDB features include gridFS and Replication. These features support an increase in Data Availability while using MongoDB. This ensures that the applications’ performance is very high.

Absence Of Schemas: MongoDB is NoSQL, meaning it does not require schemas. Therefore, it’s unnecessary to outline your database schemas when using MongoDB. This cuts down the amount of time your database takes to process information. Thus, your schema will be defined by the algorithm you code.